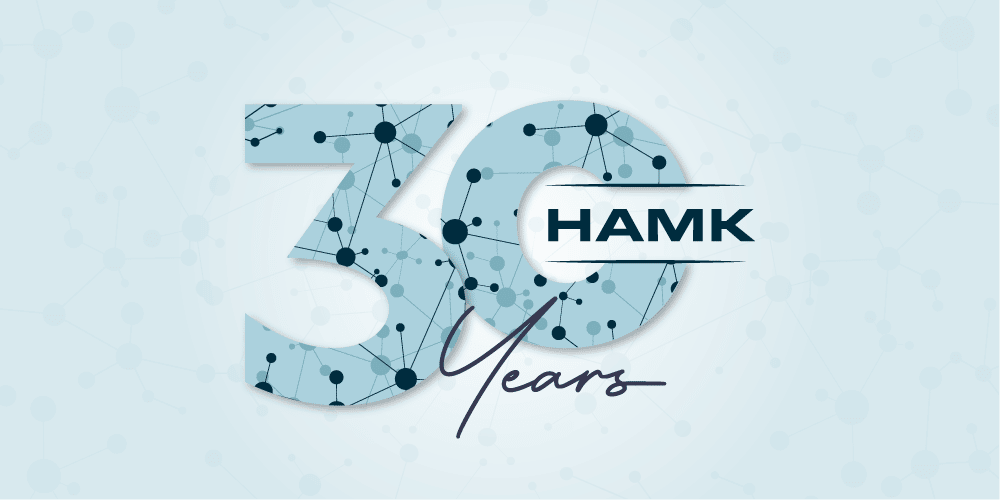 Häme University of Applied Sciences is celebrating its 30th anniversary this year. Many goals related to education, research and internationalisation have been achieved. HAMK wants to be an even stronger player both regionally, in the whole country and internationally also in the future.

HAMK has always developed its operations purposefully. HAMK’s strategy was updated in 2019 and it has achieved results in all its key objectives.

For example, the development of education is indicated by the fact that the FINEEC (Finnish Education Evaluation Centre) recently assessed HAMK’s education and quality system as excellent.  In addition, students graduate more and more on time: while in 2015, 52% of students graduated on time, the corresponding figure was 72% in 2021.

‘We have purposefully developed teaching in a student-centred direction, which enables students to make more choices and opportunities to implement their own learning path. This also came to the fore in Karvi’s assessment, when the students stated that the student’s voice is heard at HAMK’, vice president Heidi Ahokallio-Leppälä says.

Another key objective has been the development of research. HAMK’s four research units (Bio, Edu, Smart and Tech) have established their operations over the past ten years and increased cross-unit, multidisciplinary applied research. The next step in the development work, the construction of the new Smart & Bio education and research environment, will begin next year. HAMK was also given the task of leading a research project funded by the Academy of Finland, which is exceptional in the field of universities of applied sciences.

Progress has also been made in the area of internationalisation and partnerships in many ways. HAMK has joined the European University as one of the few universities of applied sciences. The supply of foreign-language degree programmes has been increased and the number of international students has grown. In addition, partnerships have also been strengthened in Finland, for example with Aalto University and XAMK.

Other, unique openings also include the establishment of a Design Factory, developed by Aalto University,  also in HAMK and launching the Entrepreneurial University concept, which takes an enterprising attitude and skills to all HAMK degree programmes. Hamk’s continuously improved ranking (14th among nearly a thousand participants year 2021) in the international GreenMetric ranking is also uique. GreenMetric measures the sustainability of higher education institutions.

However, HAMK’s President Pertti Puusaari stresses that the development work will continue also from now on.

“We want to be the most useful and working life-oriented higher education institution with impact both regionally and more widely,” Puusaari sums up.

More concrete goals for the next few years are to clarify the finnish AMK degree title to master’s degree so that it corresponds to both practice in other parts of the world and the national legislation, where the master’s degree and the university’s master’s degree are equivalent. Another goal is to increase competence and opportunities for cooperation to complete doctoral degrees at HAMK. In addition, there is a desire to further develop opportunities for receiving education that is independent of time, place and life situation.

HAMK celebrates its 30th anniversary in different ways during the autumn.